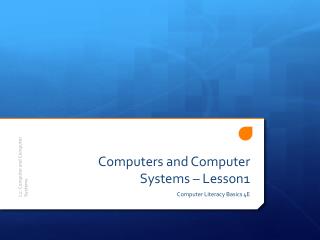 Computers and Computer Systems – Lesson1. Computer Literacy Basics 4E. Objectives. Upon completion of this lesson, you should be able to: Understand the importance of computers Define computers and computer systems Classify computers Identify system components DIVE COMPUTERS 101 - . dive computers 101 is designed to provide divers with the theory, operation and benefits of

Level 1 Lesson1 - . tsw will learn to read words with the short sounds of /a/ and /i/ in and out of text. new sounds.