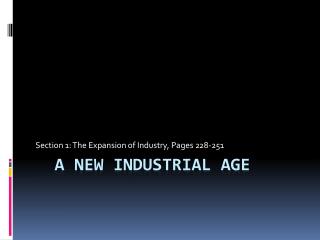 Industrial Property in Noida - A place for Business - Find here all details of industrial property for sale in noida, and

Dawn of the Industrial Age - . mr. divett. industrial revolution. people used to live in farming villages. in the

Industrial Relations - . meaning. industrial relations is a multidisciplinary field that studies the employment

The Industrial Revolution - . * what was it???. a change from an agricultural society to an industrial society.

THE INDUSTRIAL REVOLUTION - . outline:. life before the industrial revolution why in britain first? the first industrial