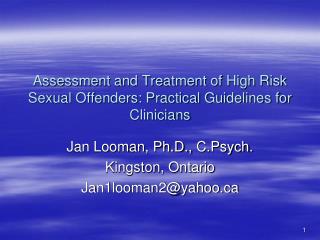 Sex Offenders Who Are They &amp; Can We Predict if They Will Reoffend - . anna c. salter, ph.d. agenda. types

The Effective Management of Juvenile Sex Offenders in the Community - . section 3: assessment. key topics for the

Module 1 - . substance abuse treatment for persons with co-occurring disorders inservice training based on a treatment

Chapter 17: Sexual Victimization: Rape, Coercion, Harassment, and Abuse of Children - . for use with human sexuality