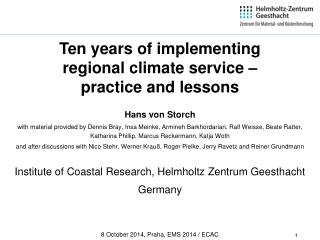 The Cell Theory Timeline - . hans and zacharias janssen were the first to invent the compound microscope (2 lenses). to

Thoracoscopy - History. thoracoscopy was introduced together with laparoscopy in 1910 by hans-christian

STORCH - . congenital infections that can cause birth defects. syphilis. is an infectious disease. the bacteria that

European Environment Agency / FLIS Blossom meeting / 17-18 June 2013 / Copenhagen - . need for an overview of the use of

Figure 1. Location of the Torne and Kalix Rivers (red) within the BALTEX domain (white) - All models participating in