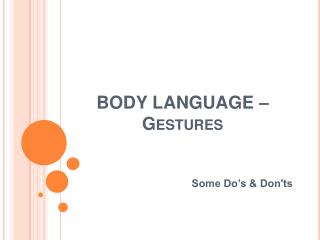 Language and Communication - Language. a system of symbolic communication using sounds and/or gestures that are able to

Beyond Words . . . Understanding and Interpreting Body Language - . introduction. humans pride themselves on their

Schema Activator: - . what is this? provide as detailed of a response as possible. symbolic culture. gestures we

BODY LANGUAGE - . w ire sculptures m s. ibarra. the body. questions we will explore what ways can we use our bodies to

Sign Language - . by: brady hennig edfx 200. sign language. what is it? it is a language that uses manual communication