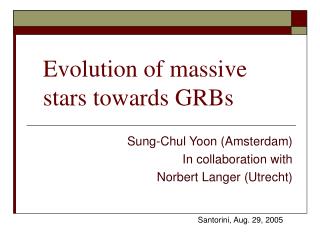 Ch 11--Life Cycle of Stars - . what do you think?. how do stars form? are stars forming today? do stars with greater or

Stars - . dr katy lancaster. overview. introduction to stars what they are what we can measure the hertzsprung-russell

Stellar Evolution: The Deaths of Stars - . chapter twenty-two. the spectral class and type of a star is directly related

The Evolution of Stars - . binary star evolution. about half the stars in the sky are binaries. these stars may begin

Stars - . nebula. nebula. massive collection of dust and gas in the universe. can be: nursery for new stars graveyard for

PH607 The Physics of Stars - . dr j. miao. we will cover the following materials:. equations of stellar structure the

Post-AGB evolution - . learning outcome. evolution from the tip of the agb to the wd stage object types along the

The structure and evolution of stars - . introduction. what are the main physical processes which determine the structure