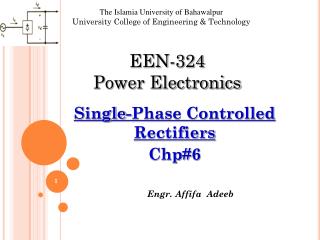 Single-Phase Controlled Rectifiers Chp#6. Introduction. Diodes of rectifier circuits in chp5 are replaced by thyristors . In thyristor based rectifiers, output voltage can be controlled. So they are termed as controlled rectifiers . DC-AC Converters (inverters) - . the function is to convert a dc fixed voltage into a symmetric ac output of fixed or