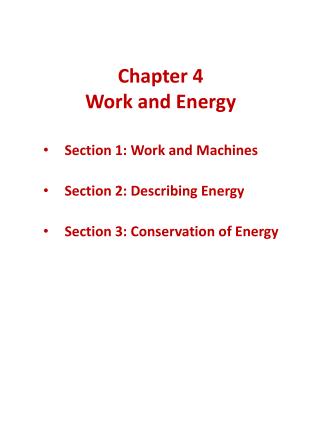 Chapter 6 - . work and kinetic energy. goals for chapter 6. to understand and calculate work done by a force to study and

Chapter 6 The Nature of Energy - . what is energy? the capacity to do work or to produce heat the law of conservation of

Physical Science Chapter 5 - . energy &amp; power. 5.1 the nature of energy. energy – the ability to do work or

Chapter 6 Energy Transfer - . chm 108 suroviec spring 2014. i. principles of heat flow. energy is the capacity to do work

Chapter 12 - . work, energy and power. energy. is the ability to do work expressed in joules ( dzuls ) forms of energy:

Chapter 3 Work and Energy - . work : “work is the product of force and distance.’’ work = force × distance or in

Chapter 5 - . work and machines. work. the transfer of energy to cause or make an object move. work. if there is no

Kinetic Energy and Work - . chapter 7. work and energy. energy: scalar quantity associated with a state (or condition) of

Chapter 7 - . energy. energy. universe is made up of matter and energy energy is the mover of matter. energy has several