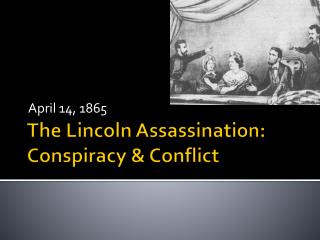 Conspiracy - . by ashley geeves. what is conspiracy?. an agreement between two or more people to do an unlawful act. most

The Assassination of - . abraham lincoln. objectives:. the following presentation is divided into (3) sections with

The Assassination of Abraham Lincoln. - By the group of: tyler dawson, chris reid, marquese hayes, conor n. the

LINCOLN ASSASSINATION - . what was the most interesting or surprising part of the film? what do you think booth was

Conspiracy - . more than one man. oswald's difficulties while shooting. had to shoot with trees in his line of vision.

The JFK Assassination - . the conspiracy theories. introduction. president john f. kennedy was assassinated as he

The Conspiracy Theory Behind the Assassination of President Lincoln - . by: megan devin de us history john noel november

The JFK Assassination - . you will need…. arriving in dallas. **jfk went to texas in the fall of 1963 to gain southern

The Conspiracy Theory - American literature research paper. the conspiracy theory. “a secret plan to commit a crime; a