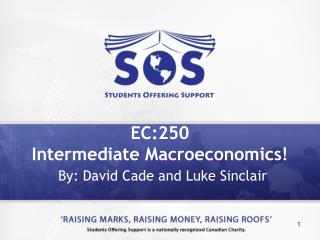 EC:250 Intermediate Macroeconomics!. By: David Cade and Luke Sinclair. Today’s Schedule. Cover each chapter in detail We will have examples after each concept so don’t worry if you don’t get it right away Questions Go over some more in-depth, comprehensive questions Exam study tips Intermediate 2 Physics - . in addition to set homework you will be expected to finish off class notes and regularly