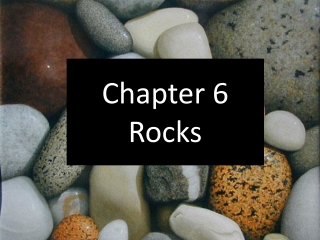 Ch. 6 Rocks. Chapter 6 Rocks. What is a Rock?. Rocks = Naturally-occurring mixtures of minerals , Mineraloids, glass or organic matter . Mineraloid =opal, Amber, coal, etc. What is the difference between a rock and a mineral ? Rocks are made up of ONE or MORE minerals . Ch 6 - Thermal energy. ch 6. sec 1 temperature and heat. as you will find out in ps1, all matter is made up of tiny

Ch 6 - . why is “ being in a group of six boys ” dangerous? how did rap and a stranger save the boys in this

Ch. 6 - . social interaction. what is social structure?. the stable pattern of social relationships that exists within

Ch # 6 - . electronic structure and chemical periodicity. the periodic law : . it states that when elements are arranged