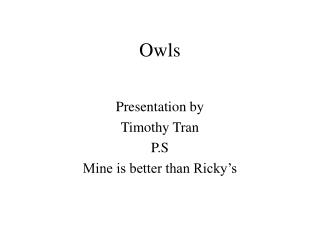 Owls. Presentation by Timothy Tran P.S Mine is better than Ricky’s. Description. Owls - . by: brandon . habitat: . owls live in holes they live in barns some live in nests. description. owls have large

Owls - . by hunter harris and brooke plummer june 2013. description. . owls can’t move their eyes. t hat is why they

owls - . facts. owls have to swallow their small bits of food whole and with their lager bits of food they rip it up.

owls - . by maggie. owls are farsighted. owls weight is 28 grams. most owls ofton live in places that are less than 2,56.

Owls - By astrid, audrey and jaede. owls. we will tell you about all kinds of owls. snowy owls ,elf owls and other stuff!

Owls - . silent hunters!. what do you know about owls? think about these vocabulary words and how they are related to

Owls - Owls. owls. by : tristan. owls are active at night it is called nocternal. owls have power full tallens (claws)