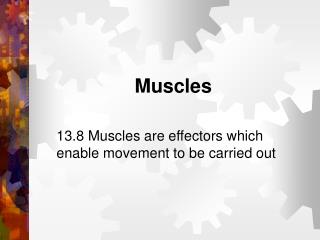 Muscles. 13.8 Muscles are effectors which enable movement to be carried out. Muscle. Is responsible for almost all the movements in animals 3 types. Muscles & the Skeleton. Skeletal muscles cause the skeleton to move at joints They are attached to skeleton by tendons.