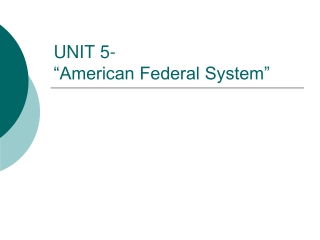 Unit 1 Historical and Philosophical Foundations of American Government - . essential question. what are the philosophical

We the People: Unit 1 - . what are the philosophical and historical foundations of the american political system?. unit 1

Course Review: The Federal System and the YCJA - . social studies 9. unit 1: outline. unit 1 focuses on the structure of

American Government Unit 4 - . chapter 7: the electoral process. bellringer. why do you think it is necessary to have a

American Constitutional Law LAW-210 - . the constitution and the federal government: an overview. unit objectives. at the