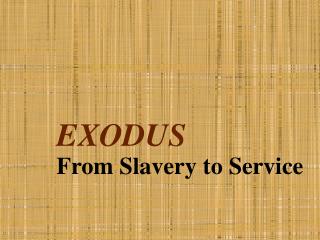 EXODUS. From Slavery to Service. 2. Preparing the Way. The Women Who Save Moses (Exodus 1:15–2:10). References. Exodus (from series Interpretation: A Bible Commentary for Teaching and Preaching) Terence E. Fretheim, Westminister / John Knox Press, 1991

Exodus - : the birth of a nation. backgroundeighteenth dynasty egypt, the setting for israel's dramatic departure, was a

EXODUS - . from slavery to service. introduction 1. the birth of israel. slavery in egypt (exodus 1:1-14). resources.

EXODUS - . the book of redemption. © john stevenson, 2008. session objectives. study god’s self revelation to moses as

Exodus - . the exodus experience. challenges historians face. sources no independent egyptian sources. the bible does not

Exodus - . the journey. account of moses. after joseph and his family moved to egypt, the israelites remained for

EXODUS - . moses in a basket??. sargon of akkad babylonian story he was placed in a basket by a priestess who was not

EXODUS - . from slavery to service. references. exodus (from series interpretation: a bible commentary for teaching and

Exodus - By: zac , molly, and brian. exodus. connections: family. nathan: pharaoh orleanna: moses, “many are the

Exodus - . 1. israelites multiply; oppression in egypt 1. the children of israel, after joseph's death, increase. 8. the