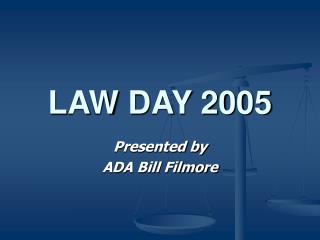 LAW DAY 2005 Presented by ADA Bill Filmore What is Law Day? Began in 1958 Law Day, May 1, is a national day of celebration, where we traditionally honor our freedoms as Americans – freedoms protected by our laws and legal institutions

HISTORY DAY 2005 - . communication in history: the key to understanding. what is history day?. semester-long experience

ELDER LAW IN A DAY

UNDERGRADUATE RESEARCH DAY April 13, 2005 - Whereas, undergraduate research is a critical component of experiential

Info Day Brussels, 2 June 2005 - . instruments: purposes and modalities in the so structure. so 2.5.9 “collaborative