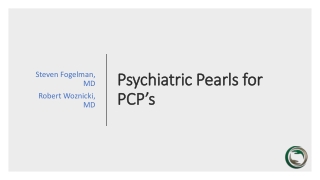 Psychiatric Pearls for PCP’s. Steven Fogelman, MD Robert Woznicki, MD. The patient is a 36 year old male. He works as a manager at a bank branch in town. He comes at the urging of his wife, because he just doesn’t feel well. He has multiple physical complaints.