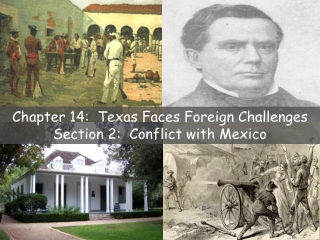 Chapter 14: Texas Faces Foreign Challenges Section 2: Conflict with Mexico. Thinking Question. Imagine you are the leader of Mexico, what are some policies you might have towards Texas following the Texas Revolution?. Santa Fe Expedition. Texas claimed Rio Grande as southern border