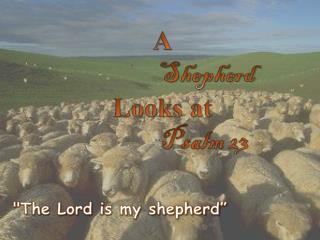 of Psalm 23 - . possession “the lord is my shepherd”. of all the things that any one man can possess, there is none

A Different Look at Psalm 23 This an eye opener; probably we never thought nor looked at this Psalm in this way, even

STRESSBUSTERS &amp; ANTIDOTES FROM PSALM 23 - . t he seven greatest sources of stress. they are all found in psalm

Moses – A Caring Shepherd - . the duties of a shepherd. the shepherd is to feed the flock according to the integrity of

German shepherd - . by: andres heiman. shoulders-this is the joint at the uppermost part of the german shepherds

Psalm 23 (New International Version) 1 The LORD is my shepherd, I shall not be in want. - Psalm 23 (new international

23 - . the digestive system: part b. pharynx. oropharynx and laryngopharynx allow passage of food, fluids, and air