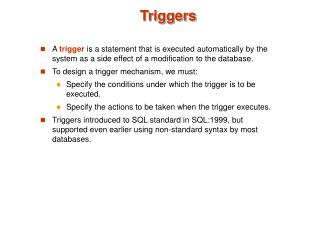 Triggers. A trigger is a statement that is executed automatically by the system as a side effect of a modification to the database. To design a trigger mechanism, we must: Specify the conditions under which the trigger is to be executed. Triggere - . mutasjoner i basen. triggers. triggers are stored procedures that execute automatically when something

CPSC 4670 Database Security and Auditing Oracle PL/SQL: Triggers - . triggers. an sql trigger is a mechanism that