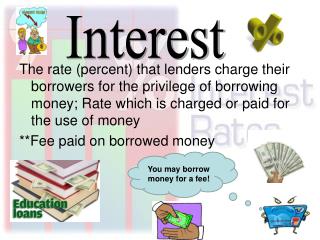 Interest. The rate (percent) that lenders charge their borrowers for the privilege of borrowing money; Rate which is charged or paid for the use of money **Fee paid on borrowed money. You may borrow money for a fee!. Consumer. One who buys goods and services. Consumer Spending: Interest - . what is interest? . the amount of money the borrow must pay for the use of someone else’s money payment

Interest - . unit 3. what is interest?. only your dumbest or kindest friends and family members will be willing to lend

Compound Interest and Simple Interest - . principal the money borrowed or lent out for a certain period is called

Interest Groups - . now chapter 7. value of interest groups. organizations that seek to achieve their goals by

Interest Groups - . what is social capital?. the norms and trust that develop from interpersonal social relationships a