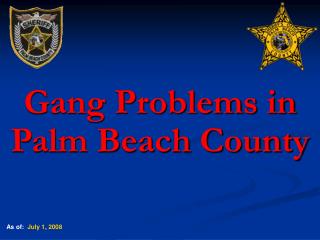 Gang Problems in Palm Beach County. As of: July 1, 2008. Palm Beach County Gang Historical Perspective. There have been documented gangs in the County/Region for over 20 years. The gangs mostly associated with illicit drug trade. Palm Beach County - What do principals need to know?. what does a great school library program look like? how do i

The Palm Beach County - . school justice partnership. what works for us!. why we do it!. youth benefits improved

Roofing Contractors in Palm beach County - Each commercial establishment in boca raton is unique. for either industrial

Palm Beach County, FL Foreclosures - We are floridas #1 property wholesalers. we are investors in the usa and we want to

PALM BEACH COUNTY FIRE RESCUE SERVICES - . our firefighters and fire rescue – they prepare for the worst while being