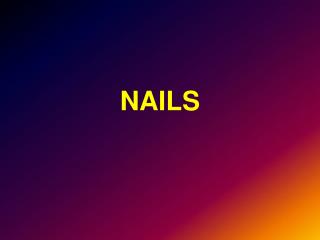 NAILS. Anatomy. Nail plate: is the hard and translucent portion, composed of keratin Its free edge is the part that extends past the finger 2. Lunula : is the crescent shaped whitish area of the nail bed How To Stop Biting Nails - Https://www.amazon.com/gp/product/b0000yuxi0/ about half of all kids and teens bite their

Nails And Skin Care - Perfect nails and skin care believe in quality workmanship, not servicing as many clients as

Make your nails look dazzling with the Dubai Nail Art Service - In 1988, bio sculpture clear gel was registered as the Common Types of Nails - . fasteners unit. objectives. 1. define what a fastener is in the classroom with 100% accuracy.

Caring for your Hair and Nails - . lesson 1. why should i care about my hair?. appearance is important, but taking care

Kids Nail Art Game for Kids FREE at Google Play - Want to have beautiful nails? come on, spice up your nails with our new

Ag Mechanics I - . hobbton high proper use of hand tools mr. tim warren. hammers. hold hammer near the end away from th e