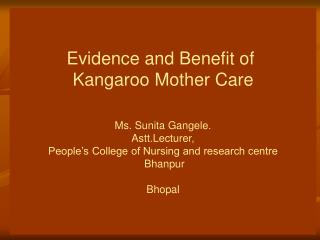 Evidence and Benefit of Kangaroo Mother Care Ms. Sunita Gangele. Astt.Lecturer, People’s College of Nursing and research centre Bhanpur Bhopal. “The Kangaroo Mother Program is a ray of hope for the millions of children throughout the world who are born premature and The History of Perioperative Nursing - . by: ruth crothers, rn bsn cnor rnfa. why care about the history of nursing?.

Nursing Care of the Adult (or anyone) experiencing shock - . donna roberson, phd, aprn, bc sharon cherry,mph,cne