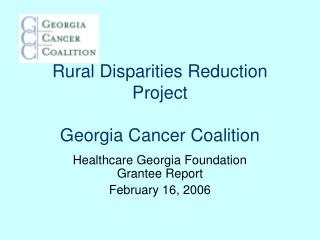 Disparities in Cancer - . september 22, 2008. introduction. despite notable advances in cancer prevention, screening, and

Coalition for Poverty Reduction - . alone we can do so little; together we can do so much. survey data. 965 anonymous

Cancer Hospitals in Georgia - Best hospitals in the atlanta, georgia metropolitan area, 3 are nationally ranked or

Georgia Coalition to Prevent Underage Drinking - . organizational development: how will we work together?. how will we