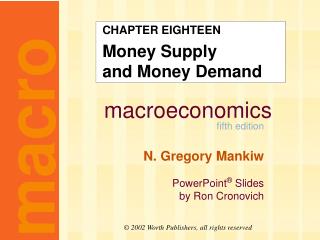 Money Demand and Supply Functions - . chapter 8. 1. significance of money. one of the three great inventions factor of

Money Demand and Transmission - . the ‘monetary transmission mechanism’ captures the steps and pathways through

Demand for Money and the Money Market - . the opportunity cost of holding money. people weigh decisions about how much

Money Supply Comments - . m1 focuses on money as a medium of exchange such as for settling a debt. m2 includes money as a

Chapter VIII: Money supply and monetary policy - . a. the ecb and the fed b. the supply of base money c. controlling the

Demand of Money - . evolution of money. money was developed according to needs &amp; requirements. main aim was to

Understanding Money Demand - . money can be anything that satisfies: store of value unit of account medium of exchange