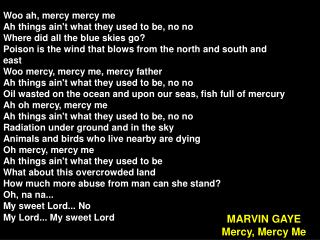 Marvin Gaye - Doo-wop. marvin gaye. summary . marvin was a popular musician he sang in his fathers church. his mother was

MARVIN GAYE - . who is he?. ain’t no mountain high enough. ～ his wonderful life, but sad life ～. important task.

When Mercy Found Me - . rhett walker band. i can't count the broken roads i've been down, but all i know; something had

Mercy - . psalm 51. psalm 51 intro: why ask for mercy?. what is the key characteristic of a christian? what should we be

Mercy - . “blessed are the merciful, for they shall obtain mercy.” matthew 5:7. what is mercy?. the basic meaning

ABOUT MERCY - . what we stand for…. our mission statement as the sisters of mercy before us, we bring to life the

Mercy Cremations - When a loved one passes away, there are many emotions that need to be processed, and at mercy

Mercy Homes - Reasons to invest in

Mercy Wolf - . the wolfs yellow eye its glare penetrating like lightning. a whimper a tremble a curl of the tough then a

Living Mercy - . a formation series to accompany our preparation for the social mission conference 2016. 2 . who is my