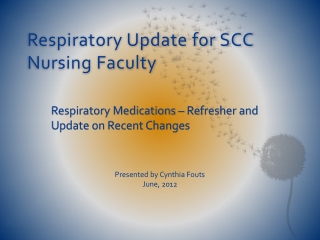 Respiratory Update for SCC Nursing Faculty. Respiratory Medications – Refresher and Update on Recent Changes. Presented by Cynthia Fouts June, 2012. Learning Objectives :. At the conclusion of viewing this presentation, the learner will be able to classify respiratory medications. Faculty Update - . “we are what we repeatedly do. excellence, then, is not an act, but a habit.” -aristotle. what

Faculty of Nursing-IUG - . chapter (12) assessment of musculo -skeletal s ystem. the primary structures of the