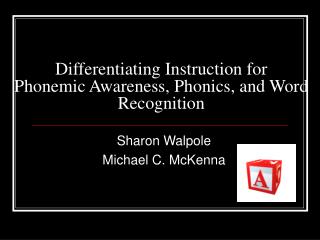 Differentiating Instruction for Phonemic Awareness, Phonics, and Word Recognition. Sharon Walpole Michael C. McKenna. Agenda. Who needs this type of instruction? What data must be gathered? What planning decisions must be made? What are some tricks of the trade?.

The Five Pillars of Reading - . reading strategies &amp; activities. learning to read. what are you earliest memories

Introduction to Phonemic Awareness &amp; Phonics - . “i know how to spell s”. “e - s”. although a bit mixed

WHEN “CAT” HAS 3 SOUNDS… NONE OF WHICH IS “MEOW”! - . phonological and phonemic awareness in early literacy

Teaching Phonics and Phonemic Awareness - . steven a. stahl university of illinois at urbana-champaign center for the

Phonemic/Phonological Awareness - . student handout. syllabication. listen to the words as i pronounce them. tell me how

Phonemic Awareness - . by sarah blackburn. what?. phonemic awareness – the ability to detect, identify, and manipulate

Chapter 6: PHONICS - . jan hughes. what. phonics is the instruction of the relationship between letters and the sounds

The Five Pillars of Reading - . reading strategies &amp; activities. learning to read. what are you earliest memories