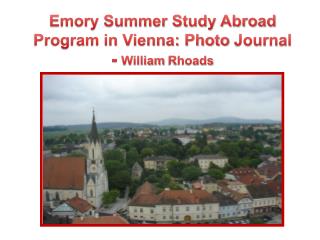 Antarctic Journal: Four Months at the Bottom of the World - . written by jennifer owings dewey. compiled by: terry sams

Employment of Emory and Non-Emory F and J Students for CPT, OPT and AT - . wednesday, april 19, 2006 presented by office

Summer Program in Field Biology - . through the university of texas at san antonio. may 26-june 19, 2009 explore the

2010 Romania Study Abroad - . general orientation. getting there. half the fun (we hope) arrange your air transportation