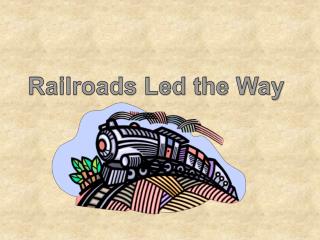 Railroads Led the Way . Improving the Railroads. Each R/R built it’s own tracks to its own specs no unified code tracks not interchangeable made travel inefficient adopted a standard gauge. Objective : To examine the growth of the railroad industry. T wo problems early railroads had. Technology and Resources - . the age of railroads. chapter 14 section 2. as railroads spread across the country…. they

The Growth of the Railroads: Railroads Lead the Way

Historical look at Railroads in the West - . introduction. this is a review of the railroads and cities as they developed

Era Prior to Railroads - Building a railroad. by 1855 local railroads under constructionfed. government agreed to give 20

Unit 9 Cotton, Cattle, and Railroads - Historians divide the past into eras so it is easier to identify causes and

Section 2 - . railroads transform the nation. section 2 objectives. to analyze the funding for the first transcontinental

Railroads in the Industrial Revolution - . by: mary clare, susanne, and christina. who?. still today, it is hard to

Railroads in Illinois - . analyzing population growth in carbondale and du quoin with the expansion of the railroad over