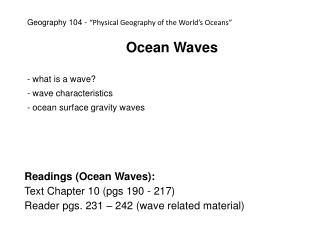 Waves in the Sea - . an ocean wave is a rhythmic rise and fall of the water’s surface. most commonly produced by wind.

Forecasting Ocean Waves - . problem: given observed or expected weather, what will be the sea state? ships are sunk not

Waves - . waves. the nature of waves what’s in a wave waves and energy mechanical waves. what is a wave?. a wave is a

Summary and Conclusions - A study of the effect of surface ocean waves on ocean circulation abstract: a coupled

Ocean Waves and Tides - . waves. a wave is a rhythmic movement that carries energy through matter or space. in oceans,

Ocean Waves - . anatomy of a wave. a wave is the motion of a form that carries energy from one place to another the form

Types of Waves - . waves. a wave is a back and forth motion that carries energy through matter or through space.

WAVES - . types of waves and their properties. questions of the week. what is a wave? what kinds of waves are there?.