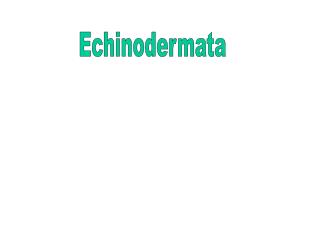 Echinodermata. I. Phylum Echinodermata (“spiny skinned” animals). A. Characteristics. 1. First animals that are deuterostomates (blastopore develops into the anus). a. they are also the first to show indeterminant development and have radial cleavage. Echinodermata - . a phylogeny can help us do lots more than simply study evolutionary history. it also helps us know what