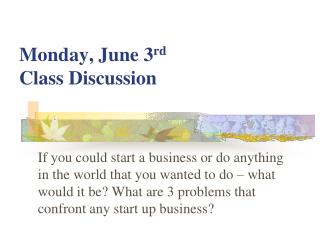 Monday, June 3 rd Class Discussion. If you could start a business or do anything in the world that you wanted to do – what would it be ? What are 3 problems that confront any start up business?. Here is the plan…. Monday, January 3 rd - . set up notebook page 12: the muslim world left side: how did islam begin as a religion, and what

Monday, December 3 rd - . come to the front with your walden homework. review walden . homework: read the excerpt from

Monday, February 3 rd - . entry task make sure your comic strip includes all of the different places you visited, how

Monday October 3 rd - . wrap up of chapter 3 -some people need to take ch 3 test -some need to finish ch 3 test -others

Monday, February 3 rd - . jimmy goes to the beach at 7:00am and notices a low tide occurring. when will he see the next

Monday , March 17th Class Discussion - . what is an acronym? how is it different from an abbreviation? can you come up

Class Discussion Monday, March 19th - . tell me everything you know (be specific) about the arab / israeli conflict. here

Monday 3 rd September - morning - . 08:35 intervention on plc for vacuum in pm76 is finished sector 78 tripped cause by a