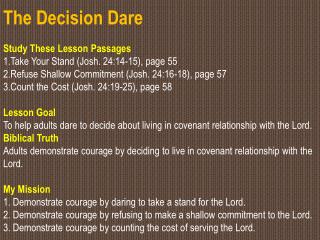 Difficult Passages In Hebrews - . what are we to make of the writer’s use of the ot? he seems to quote various ot texts

Going Over the Sea traditional rhyme from Canada PowerPoint by Camille Page - . when i was one i ate a bun , going over

Decision Trees - . a “divisive” method (splits) start with “root node” – all in one group get splitting rules

Decision Analysis - . decision analysis. effective decision-making requires that we understand: the nature of the

Bible Study 104 Lesson 5 - . grade 4-5 sunday-school lesson. &quot;for with god nothing will be impossible&quot;

Dare to Celebrate Pastor Jon Fulton August 17, 2014 Series: Truth or Dare - . “for those who exalt themselves will be