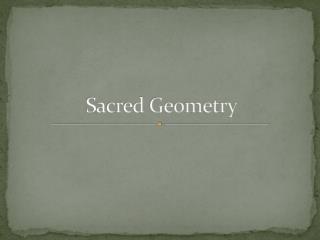 Sacred Geometry. What is Sacred Geometry?. Sacred Geometry – religious, philosophical, and spiritual beliefs that have surrounded geometry in various cultures throughout history. www.arthistory.sbc.edu/sacredplaces. The Medicine Wheel. Sacred Tradition and Sacred Scripture - . rcia september 24, 2015. tradition and scripture. as catholics we

Sacred Spaces - . a presentation of the boniuk center for the study and advancement of religious tolerance at rice

Sacred Cow - . a belief, assumption, practice, policy, system, strategy, etc. that is considered to be exempt from

Sacred Pages - . by john waller. this earth is crammed with heaven and every common bush is blazing with the fire of god.

Sacred Passage - How to provide fearless, compassionate care for the dying by margaret coberly , ph.d.,

Sacred Texts - . the bible and beyond. sacred texts in all religions. torah (judaism) bible (christianity) qur’an

Sacred Salagram - . by: divya venkat. what is a salagram?. it is a sacred stone representing the abstract form of lord

SACRED TEXTS - . the role of sacred text. walt : understand about the way different books are treated and what this shows

Sacred Stories - . kinds of sacred stories. myth : stories that explain why the world is the way it is sacred history