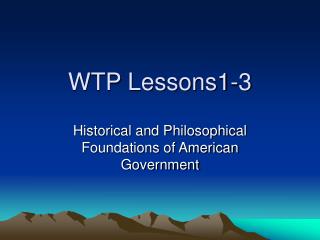 WTP Lessons1-3. Historical and Philosophical Foundations of American Government. Characteristics of Colonies. US is independent after Treaty of Paris 1783 Colonies are diverse, so enacting a common gov’t was not an easy task WTP: Unit One - . what are the philosophical and historical foundations of the american political system?. lesson