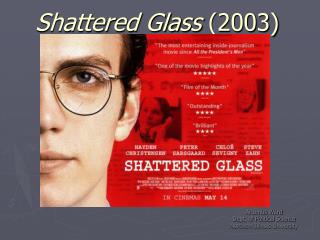 Shattered Glass (2003). Artemus Ward Dept. of Political Science Northern Illinois University. Making the Film. Director Billy Ray said he “checked with two separate sources” to confirm that an event had occurred before including it in the movie. Shattered: Forensic Glass Analysis - . what is glass?. “an inorganic product of fusion which has cooled to a rigid

Shattered: Forensic Glass Analysis - . bell work for tuesday, october 9 2012. study for your test today!! be sure to

Shattered - . photos by james nachtwey. some people will do anything for product placement…. the pentagon. september

Prosperity Shattered - . chapter 15 section 1. economic troubles on the horizon. warnings that the econ was in trouble

Prosperity Shattered - . chapter 24 section 1. a. economic troubles on the horizon hoover told the people that the usa is

The Shattered Soul - . life in the balance. spiritual reactions to trauma. confusion about god altered sense of meaning

The Shattered Drawing - . learning about value and the blending of values to create depth. choose a picture or real