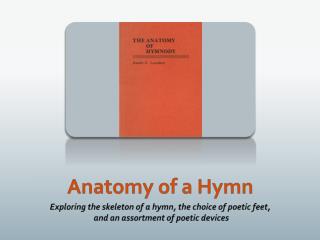 Anatomy of a Hymn Anatomy of a Hymn. Exploring the skeleton of a hymn, the choice of poetic feet, and an assortment of poetic devices. Question:. Why does the poet choose one pattern of accent rather than another for his/her hymn?. Prosody and Rhyme.

Anatomy of a Hymn

Anatomy of a campaign - . the 4 stage process to get it right andrew leon walker. any questions? contact rame marketing

What Makes a Hymn a Hymn? - . the structural elements of a hymn. what is a hymn ?. a hymn is a combination of doctrine

Anatomy of a Computer - By: ashley st. lawrence. anatomy of a computer.

ANATOMY OF A PICTOGRAPH - . pictographs use pictures to represent differences in quantities of a variable. below are two

Anatomy of a Model - Reuse. elicitation. modeling. autotest. simulation. autocode. analysis. anatomy of a model. may 29,

Anatomy of a Deal - Center for entrepreneurship jerry feigen “an anatomy of a deal” march 13, 2003 nih bio business

ANATOMY OF A GENOCIDE - . genocide. the deliberate and systematic extermination of a national, racial, political, or

Anatomy of a Gene - . bellwork. objective: swbat describe and draw the anatomy of a gene as well as the function of each

A Hymn of Glory Let Us Sing - . why do you stand here looking into the sky? this same jesus…will come back in the same