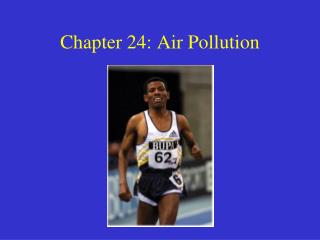 Chapter 24: Air Pollution. A Brief History of Air Pollution. The atmosphere has long been a sink for waste disposal. Long history of recognition of the existence of atmospheric pollutants Natural photochemical smog recognized in 1550 Acid rain first described in 17 th century Water Pollution - . chapter 20. water pollution causes illness and death in humans and other species and disrupts

Water Pollution Chapter 19 - . “today everybody is downwind or downstream from somebody else.” william ruckelshaus.

HS 471 AIR POLLUTION Chapter 12 - . air pollution in los angeles. we have some of the worst air in the nation, and the