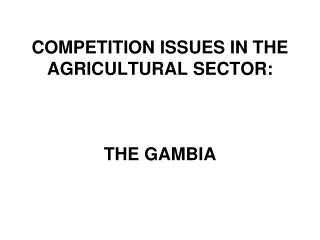 Agricultural Tractor and Machinery Safety Training - . chapter 4 tractors. the student will be able to:. - demonstrate

Economic Liberalization and the Tourism Sector in Tanzania - . overview of the tourism sector liberalization of the

Pure Competition and Monopolistic Competition Chapter 10 - . pure competition is a standard against which other market

Von Thunen’s Theories of Land Use and Agricultural Organization - . how is agricultural land organized? how does this

Lecture 9: Interspecific Competition - . eees 3050. competition. in the past chapters, we have been discussing how