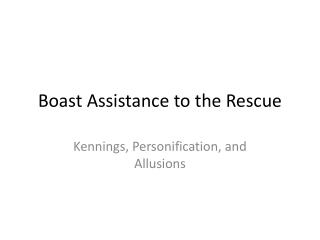 Boast Assistance to the Rescue Boast Assistance to the Rescue. Kennings, Personification, and Allusions. Kenning:. An Anglo-Saxon device this is a two or three-worded phrase that is highly metaphorical and takes the place of a noun Example: Teacher= Learning Shepherd. Kenning Examples:.

Boast Assistance to the Rescue

Feeling faint - Coming to the rescue when people pass

Technical Assistance - . objectives. differentiate the form of delivering technical assistance by the ro and do before

Water Rescue Awareness - . king county in 2006 31 people drowned of these 21 took place in open water most occurred in

Trench Awareness - . presented by the… office of the state fire marshall of illinois. course content. introduction

Vehicle Rescue and Extrication - . 25. objectives (1 of 2). describe the vehicle anatomy. list the hazards involved in

Trench Rescue I - . presented by the… office of the state fire marshall of illinois. course content. introduction

Rescue Systems I Disaster response and Structural Collapse - . by jeff palensky firefighter/paramedic. disasters can be

Skoda Kodiaq - The All New Skoda - Comfortable in any place and in all conditions, the Å koda kodiaq combines a robust