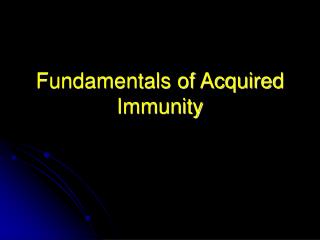 Fundamentals of Acquired Immunity. I. Definitions. Immunology – the study of all aspects of host defense against infection and of adverse consequences of immune response Immunity – the state of protection fro infectious diseases utilizing both innate and acquired mechanisms.

The Complement System and the Integration of Innate and Acquired Immunity - . david j. kusner, m.d., ph.d. the integrated

Transfer of Immunity - . d. i. stott. introduction. fetus as allograft . rejection avoided by:- separation of fetal