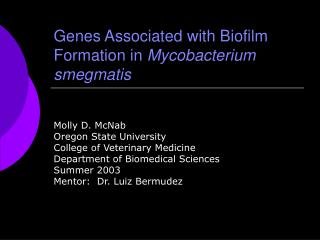 Lecture 4 Genes associated with cancer - . intended learning outcomes. by the end of this lecture, students will learn:

Types of Genes Associated with Cancer - . cancer can be caused by mutations to genes that regulate cell growth and

Mycobacterium - . mycobacterium. this genus is composed of: strictly aerobic, acid-fast rods, does not stain well (gram