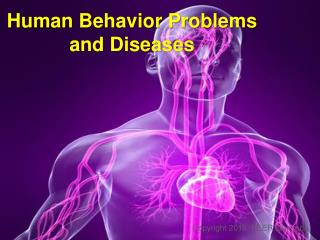 Human Behavior Problems and Diseases. Copyright 2010. PEER.tamu.edu. Topics to be Covered:. Common brain problems Specific nervous system diseases Alcoholism and drug abuse. What Can Happen to the Brain:. Chemical messengers (transmitters) in the brain can be enhanced or suppressed.

Communicable and Non-Communicable Diseases - . journal #1. what could you do to help prevent the spread of communicable

Anesthesia and pulmonary diseases - . dr abdollahi. thoracic and upper abdominal operations are a particular risk for