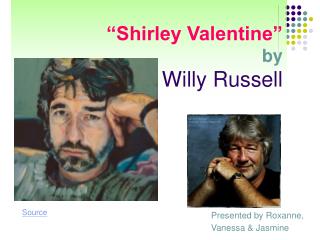 “Shirley Valentine” by Willy Russell. Source. Presented by Roxanne, Vanessa & Jasmine. Willy Russell (1947- ). - He was born in 1947 at Shiston near Liverpool, England. - At fifteen he left with little idea of what he wanted to do beyond a vague notion

Valentine’s Day - . customs and symbols. february 14th. valentine’s day is on february 14 th . both children and

Willy and Linda - . by kathleen and nichola . characteristics of willy. past 60 years of age, dressed quietly, his

Valentine’s Day - . customs and symbols. february 14th. valentine’s day is on february 14 th . both children and

Valentine - . by carol ann duffy. complete the spider diagram thinking about the concept of valentine's day. write down

Valentine Poems - . valentine there's nothing like a valentine, to make a smile appear, a heart-shaped card filled with

Valentine's Day - . lovers day at 14 th february. the name is derived from st. valentine. the main custom is sending