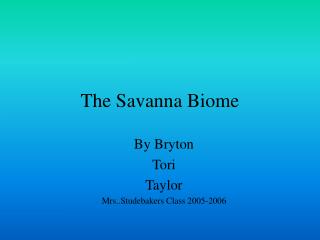 Savanna Biome - . tropical grassland with some clumps of trees . trees can be palm, pine, and acacia animals include

The environmental factors delimiting the savanna biome are complex: - Introduction to south african landscape systems at

The savanna - . by aqeelah welsh and sahana kanabar. http://room42.wikispaces.com/savanna+climate. where???? . http://

The Savanna - . in the beautiful, one and only,. package includes:. 5 * hotel (the ravelobe hotel) with complementary

THE SAVANNA - . the tropical grasslands. to the serengeti. 18 hour flight across land and ocean to tanzania, central