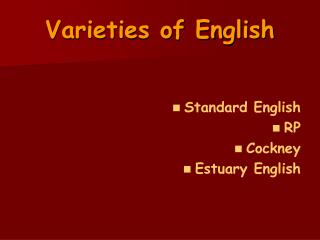 The History of the English Language - . research paper. copy this thesis on to a card. it is the last sentence of your

ENGLISH AND READING ACT PREP CLASS - . ms. willems. log on to a computer, open the email i sent you and load my wiki

ENGLISH DIALECTS AND ACCENTS - . hughes a., trudgill p . , english accents and dialects (an introduction to social and

The Mill on the Floss As a Novel On The Varieties of Love Theme Dr. Sandip Sarang Lecturer in English G.C.G.-11, Chan

English GCSE: C or higher – guaranteed! - . hello. getting a c in english is easier than you think. today. x. what.

A History of English - . some highlights. early influences. celtic borrowings: a few celtic words, such as crag, entered