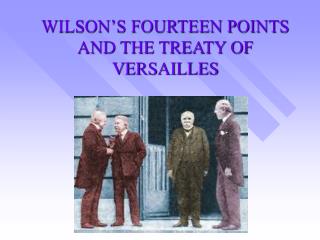 WILSON’S FOURTEEN POINTS AND THE TREATY OF VERSAILLES

WILSON’S FOURTEEN POINTS AND THE TREATY OF VERSAILLES. WORLD WAR I ENDED IN 1918. As a result of its role in World War I, the United States emerged as a dominant global power. President Woodrow Wilson wanted to make World War I the war to end all wars.

WILSON’S FOURTEEN POINTS AND THE TREATY OF VERSAILLES

Treaty of Versailles and WWI Treaties - . objectives : 1) demonstrate an understanding of the similarities and

Woodrow Wilson, His 14 Points and the League of Nations - . as wwi drew to a close…. president woodrow wilson called

Treaty of Versailles/ 14 Points - . part 1. essential question : what were the major provisions of wilson’s 14 points

The Treaty of Versailles The “Peace” Treaty that led to Hitler - . “this is not a peace treaty. it is a 20 year

What was the Treaty of Versailles? - . the treaty of versailles was one of the “peace treaties” of wwi. it was signed

End of WWI: Making Peace - . war is over!. different sides had to come together to discuss peace agreements each side

Was the Treaty of Versailles fair? - . lesson objectives. to evaluate the positions of the allied powers before the

WILSON'S 14 POINTS - . president wilson’s 14 points were his ideas to “end all war”. these are a summary of his

The Treaty Of Versailles: - . the outcome, aims and implications of the decisions. the paris peace conference and the

The Treaty of Versailles - . the peace treaty that would lead to war. at versailles. in 1919, delegates from numerous

TREATY OF VERSAILLES: - . losing the peace. taking a look back…. why did the united states enter into wwi?. u.s.

Chapter 10 World War I - . #3 the treaty of versailles &amp; league of nations. essential question : what were the