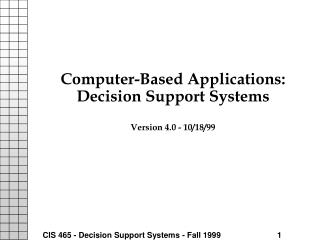 Computer-Based Applications: Decision Support Systems Version 4.0 - 10/18/99. Note to the Student:. Previous lectures have dealt with the theoretical background of decision-making - both at the individual and group levels. DECISION SUPPORT SYSTEMS - . an introduction…. what concepts are involved?. decision making the nature of decision

Decision Support Systems - . sistem penunjang keputusan. decision making. whom do we intend to support? in what capacity?